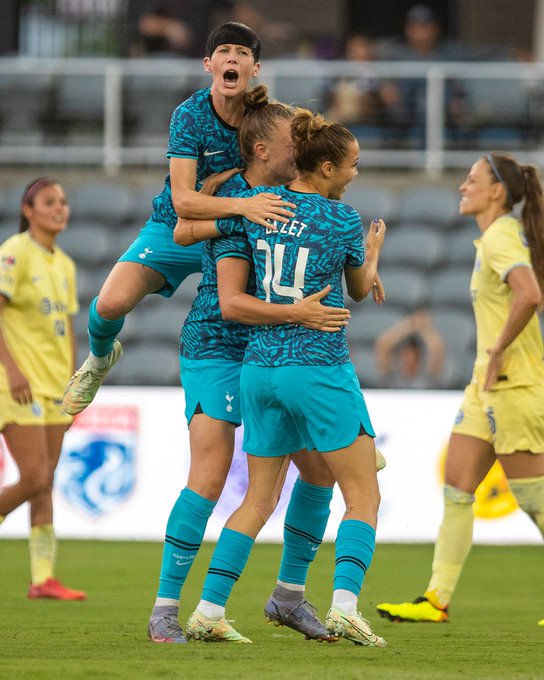 The Athletic managed to do an entire WSL Season Preview without mentioning Spurs once (yes, really!). So in the interests of balance, kind of, here’s seven hardcore Spurs Women fans on the upcoming season: Predicted finishes, what games and what players they’re most excited about and a bit on tactics!

1.   What position do you think Spurs will finish in the WSL?

Abbie:  I’ve confidently said fifth everywhere else I’ve done a league prediction, but you caught me on a day when I read through too many comments from disgruntled City, United, and Arsenal fans in the comments of the Athletic’s season preview. I feel like one of them slips up and we pip fourth!

Dustin: I think Tottenham have improved. That’s good! Unfortunately, so have the rest of the teams competing for a top half finish in the league. I think Spurs will be a better team than they were last season and I also think that it probably won’t translate to their table standing. I think they’re good enough to finish fifth and will start to close the gap between the Big Four, but I don’t see them gate-crashing that group quite yet.

Rachel: 5th. I’m crossing my fingers that Man City self-combust and we get 4th but also fearing that Everton or Villa suddenly get their shit together and it’s 6th – or worse.

Abbie:  Chelsea for sure. I know Chelsea fans are concerned about their defensive midfield but I just feel like they’re too good to fail.

Dustin:  Ithink it’s Chelsea’s league to lose. I have questions about Manchester City’s back line, Arsenal’s depth looks awfully thin on paper, and I can’t see United making the leap.

Rachel:   Chelsea look good. I’m hoping they don’t get distracted by the UWCL which is their main focus this year, cos otherwise it might be Arse.

3. Who do you think will get the other two Champions League (UWCL) spots?

Abbie:  Chelsea and Arsenal get the first two. I’ve been saying City for the 3rd but there’s just so much talk around their issues lately I can’t say it with my full chest anymore. I guess United?

Dustin:  Right now I’d say Arsenal and Manchester City are (again) most likely to qualify, but it wouldn’t surprise me if Manchester United slip into third by the end of the season. They’re certainly not shy about hiding their ambition.

Rachel: Arsenal and Man United. Arsenal are, well, Arsenal. United have strengthened considerably and are not entirely balanced but perhaps more cohesive than City.

4. Who do you think will get relegated from the WSL?

Dustin: Leicester City is the obvious choice, and for good reason. They don’t look great. I’ll feel sad for Josie Green and Abbie McManus, though. Liverpool look like they’re on the right track, but it’s tough coming back up after being relegated and I suspect they may hang around near the bottom along with Aston Villa and West Ham.

5.  Which new Spurs player are you most excited about watching and why?

Abbie:  Definitely Nikola Karczewska. We’ve already seen good things from her (shooting, making runs, pressing, even some passing!) and if she gets better it’ll be pretty incredible. Also I can’t help but throw Angharad James in here, she just works hard and does fun stuff on top of it.

Bill: Haz James, I think she’ll bring a solid presence to our midfield.

Caroline: Angharad James, because she has superb passing vision and will make our midfield more dynamic.

Dustin: For me, it’s a tie between Nikola Karczewska and Angharad James. Both looked fun as hell in Spurs’ preseason matches. Nikola looks like someone who might take a little while to adjust to the WSL, but also like a player who will start banging in goals once she feels comfortable.

Harsh: Celin Bizet, her ability to take on players in central and wide areas is hopefully gonna help us create a lot of chances.

Rachel:  Nikola. So long as the rest of the team can get the ball to her in the final third, she’s going to make things happen.

6.  Which Spurs player that left this summer do you think we’re most going to miss?

Abbie:  I’m torn between Maeva and Rachel, but I’m going to go with Rachel (1) because I think we have other players that might be able to level up and fill in the Maeva void, and (2) because I know everyone else is going to say Maeva. Rachel was the first in line in our fearsome press, she put in a huge amount of defensive work, and the ball stuck to her like glue. When I look at our general disorganization and exposed defense, I see a Rachel shaped hole. It’s like we’ve pulled the pin out of the top of a grenade, though hopefully with less disastrously explosive results. Besides, how cool would it have been to see her in a partnership with Nikola?

Caroline: Maéva Clemaron, because she was the foundation for our defensive solidity from the midfield.

Dustin: I mean, the obvious answer is Rachel Williams, but I think we’ll end up missing Maeva Clemaron more. She added so much to Spurs’ midfield last season, and her absence leaves a big hole that will be difficult to fill.

Rachel: My immediate thought is Maeva for work rate, distribution and attitude; I worry for our defence without her in front of it. But am also going to miss Rachel’s moments of magic and ability to hold onto the ball in a crowded space. Everyone new I brought to a game commented on what a player she is.

Caroline: Ash Neville as always and Nikola Karczewska for a newcomer option.

Dustin:  There are so many new faces it’s tough to say with certainty. Ash Neville doesn’t look like slowing down and maybe she’ll finally start getting England call-ups this season. I hope we can continue to expect big things from Shelina Zadorsky, and it’s hard to overlook Karczewska if she shoulders the scoring load. But I hope one of the standouts turns out to be Kit Graham!

Harsh: Celin Bizet, for the above mentioned reasons. If we keep the goal scoring/creation part aside, I think Angharad James is surely gonna be the most crucial Spurs player this season.

Rachel: Is Ash going to hand over her mantle to anyone else? Doubt it. Maybe a returning Kit? One of our new players: Angerhad or Celin? I would love to see Jess also more consistent wrt decision-making – if so she could reach another level. Looking the other direction we may need Tinni and Becky to continue to stand out!

8. Which Spurs game are you most looking forward to?

Abbie:  It’s gotta be our opener against Leicester, for very little reason other than that it’s the first game of the season and I’m excited!

Bill: Most games to be fair.

Caroline: Spurs @ Manchester City, so we can beat them again but without any dodgy handball situations involved this time.

Dustin:  The games against the top clubs are always noteworthy. I always look forward to the North London Derby, because it’s been clear the gap between the sides has narrowed significantly over the past couple of years. I feel like there’s a decent chance that we could nick a result or even a win against one of United, City, Arsenal or Chelsea this season, especially if those games are at the Tottenham Hotspur Stadium

Harsh: The very first game, can’t wait for the season to kickstart already! Looking forward to the games against City as well, hopefully we can get points off them again, but not just by being lucky this time around.

Rachel: Liverpool at home, the first game at Brisbane Road. Really excited about getting familiar with our new ‘home’ stadium – hopefully turning it into a fortress.

Sian: Brighton v Spurs, always an intriguing encounter and just down the road for me.

9. Which Spurs game are you most dreading?

Abbie:  Any of the games against Manchester United. Those games give me bad vibes, probably because of our games against them last year. I’m not happy the games were postponed last week, but I’m literally thrilled we’re not opening against United.

Caroline: Both of the Chelsea games (because it’s Chelsea).

Dustin:  Same answer as above. Football fandom is complicated!

Harsh: Arsenal at Emirates, they are mostly gonna have a packed house, things can get worse pretty fast.

Rachel: The Emirates. Eidveall, Arsenal and 40,000 Arsenal fans. What’s to like? At least we get it over with early in the season.

10. What tactical change(s) would you like to see Rehanne Skinner make this season?

Abbie:  I’d like to see us try a few strike partnerships. Stick one of Ellie Brazil or Rosella Ayane up there with Nikola. Both Ellie and Rosella are fast and can run in behind, so I’m imagining that with passers like Drew Spence and Angharad James behind them it could open up quite a lot. We did something like this against Everton last year with Tang Jiali and Rosella Ayane as the 2 in a 3-5-2 ish formation, and we put up over 3 xG. I’d like to see the better version of it.

Bill: Not sure, I would like to see us try to attack more against the top teams

Caroline: Playing a back 3 for most games, for many reasons but especially so that Ash Neville can play in a more attacking wingback role, where she thrived last season.

Dustin: I’m curious about whether Skinner will use a back three in some matches in the WSL this season and really emphasize the offensive abilities of Neville and Asmita Ale. I think there have been signs in the preseason that she’s considering it, but I’m wary that Tottenham have the defensive solidity to pull it off and not get torched on the counter.

Harsh: If we are gonna give the 3 at the back decent game time during the season, I hope Rehanne tries out Ellie Brazil at the LWB spot, at least against the relatively weaker teams.

Rachel: We’ve got some fast players who like to run onto balls and also now a proper big-woman up front so be good to see the ball getting moved forward more quickly to exploit this. At the other end, I’m yet to be convinced by our pre-season back 3 experiments which left us outnumbered in central midfield (or when the CBs moved forward, unreliable in defence), so kind of hoping this is a short-lived formation. If not, perhaps Ros or Ellie as left wing-back, opposite Ash (both show decent defensive nous and haven’t been prolific goalscorers).

Sian: Getting players in the box!

That’s it for now. If you want to agree or disagree with these predictions, or add some of your own, you can in the comments section below.

You can also follow the Spurs fans who participated in this Q&A on twitter where you’ll find links to their many other Spurs thoughts.

And if you’re looking for more Spurs season preview stuff there is an N17 Women Season Preview Podcast available for you to listen to.